We measure success in Arizona not just by its economic opportunities, but also by its quality of life. These are the experiences that foster connection, recreation, learning and relaxation—enhancing well-being and reducing health disparities for all. This is why the places we create must reflect a spirit of vitality and connectivity that is felt and experienced by all. Arizona Forward is focused on opportunities related to our canal system situated in the Phoenix metropolitan area.

“Canalscape is a concept that encourages Phoenicians to embrace the canals that give life to the desert by developing places of urban vitality’ where major streets meet canals.”  –Dr. Nan Ellin, Arizona State University, School of Geographical Sciences and Urban Planning 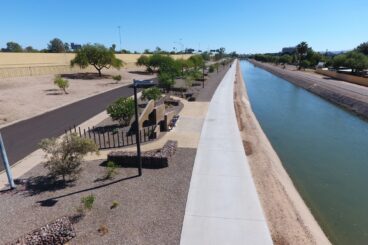 Five centuries ago, the Hohokam Indian civilization built more than 600 miles of canals in what is now the Valley of the Sun. In the late 19th century, the canal system, based on that original design, was reestablished, providing the water supply needed for growth. But new modern water delivery systems replaced the waterways, transforming these once-thriving canals into neglected and overlooked areas. That changed under the leadership of Nan Ellin, an ASU professor of urban planning and other community advocates who envisioned a restored canal system and its potential impact for Arizona communities. With the support of the Salt River Project and Arizona Forward (formerly Valley Forward), that vision became reality. This revitalization continues as related projects extend and enhance the canal system throughout the Valley. 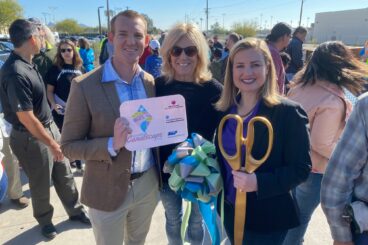 As an strong advocate for this City of Phoenix canal project, Arizona Forward supported the Grand Canalscape project, which offers residents and visitors many advantages: • Providing a safe, convenient route for the region’s growing bicycle and pedestrian traffic, including signalized crossings where streets intersect with the canal • Extending connections to bus and light rail lines • Adding spaces to surrounding neighborhoods to foster community and healthy living • Incorporating canal access points, pedestrian lighting, wayfinding, public art and landscaping to improve safety and neighborhood values Phase I and Phase II of the Grand Canal project are complete. Phase I stretches from 15th Avenue to 16th Street; Phase II includes I-17 to 15th Avenue and 16th Street to 40th Street to the border of Tempe. 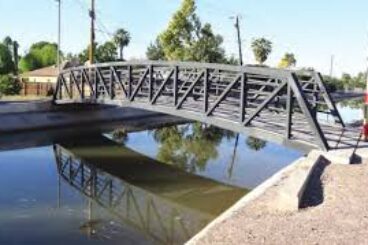 In 2012, Arizona Forward helped promote the creation of a bridge to connect four schools located along a section of the Grand Canal: Central High, Brophy College Prep, Xavier College Prep and St. Francis Xavier. The community worked on an artistic vision designed to transform a bridge into an opportunity for learning and connectivity--uniting students and the community. Arizona Forward continues to support and advocate for this project.

Without a focus on quality of life and well-being, we risk creating surroundings that are out of balance—designed with little regard to the natural landscape, conceived with no thought to growth and built without consideration for the future.

The arts play a significant role in creating thriving communities. Conceived as a joint neighborhood-artist installation, block walls that line the canal become canvases for local artists, who are invited by neighborhood homeowners to create art. The resulting vision turns canal ways into outside art galleries, offering inspiration to all who travel its trails. This is why Arizona Forward enthusiastically supports this project–and others like it–by providing expertise and resources to ensure its success.

The mural project is scheduled for spring 2021 from 3rd Street to 15th Avenue.

The vitality of our communities and surroundings, both urban and rural, impact the vitality of our populace. Arizona Forward works to ensure that the places we live, work, learn and play will strengthen sustainability, improve health and enhance well-being.

Arizona Forward accomplishes this through action: